I have been following  Being a Smallholder and the last few days she has been describing her mole catching experiences.  I promised this picture I took yesterday morning at a local farm. 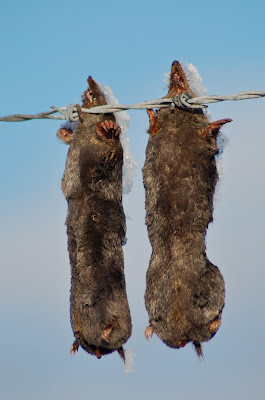 I am told that this tradition of hanging dead moles on the farm fence started so that the local Mole Catcher could prove/demonstrate his skill to his client and other landowners.  A bit gruesome for some no doubt but that's life.

When I was young, I used to see this quite often but not so much now, I guess the general public are just a bit too sensitive today.
Posted by Jon Storey at 19:27