In the spring, I was given some tiny bulbs, the parent plant flowered a month or so ago but mine has just flowered. 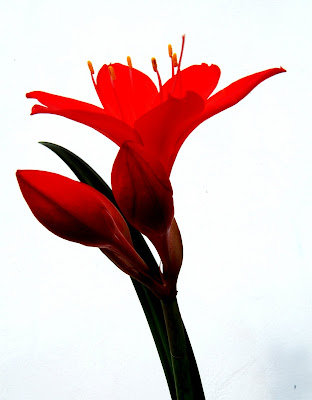 They are a rather striking flower but I didn't want to post a straight picture, the plant lending itself to something a little more 'graphic' in style.

I seemed to spend most of yesterday organising the forthcoming trip to Germany with phone calls to Cologne and trips to Hexham to get some new passport photos.  Why is it that passport photos make you look like some sort of hysterical defficient, or the local axe-murderer?  I have aquired the deluxe version, I look ancient, with digitally enhanced bags under my eyes and defective grey balance!

I needed a photocopy of No1 daughter's passport the other day, bless her, it looked like a war crimes file!
Posted by Jon Storey at 17:28