I have just about mastered this German keyboard so I can now write Köln correctly!
Fredi returned from work at lunchtime having been delayed by an injured dog (all ok now) and insisted on taking us to Köln for the afternoon and evening. 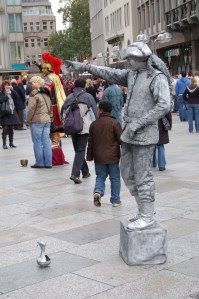 Immediately outside (100m) the rail station is the Dom or Cologne Cathederal a ´must´to see.  Outside we found this chap, he was very good, no idea who he was supposed to be but that wasn´t the point I guess. 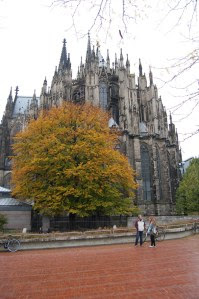 The Dom is vast and magnificent and took 800 years to complete, so there is hope for the Edinburgh Tramway! 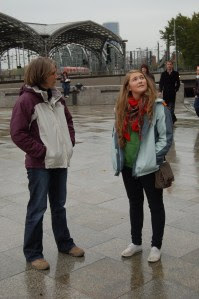 Fredi, left and No1 admiring the Dom. 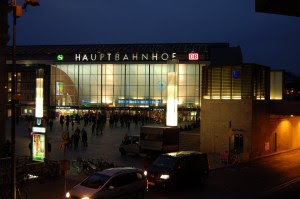 We spent ages in the Dom untill hunger drove us down beside the Rhine to find a very late but delicious lunch and a beer.  A quick walk up into the main shopping area and then back to the Dom and the Hautbahnhof a coffee and the train home.  On the way back to the flat we called ´briefly´to see No2´s Boss for the next two weeks and collect a bike so that she can get to the Klinik.  Several hours, and several Croatian Schnapps later we made it home, exhausted.
Guten nacht!
Posted by Jon Storey at 21:28